Telephone Magic Inc. is fast approaching its’ 30th Anniversary of telecom excellence. To celebrate, we have created a phenomenal business phone system promotion with NEC! 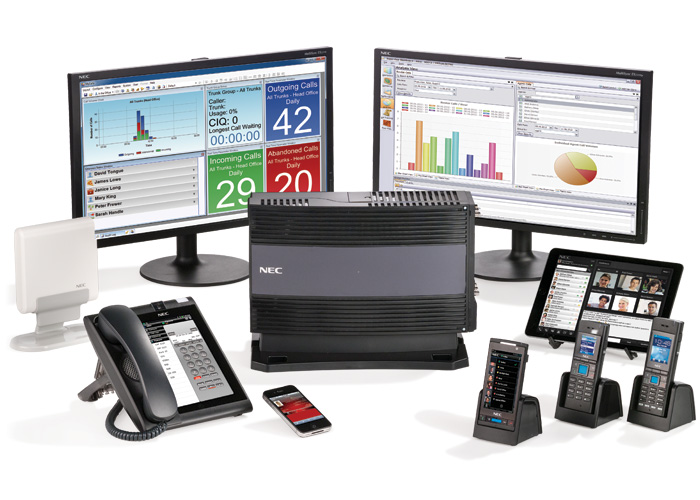 When you trade in your tired, old Nortel Norstar (or other legacy brand) business phone system, you will receive up to $2,500 towards the purchase of a new NEC phone and voice mail server.

Come out of the communications DARK AGES and get features such as Smartphone Integration with voice mail to email, mobile extension, multi-line client Apps (Android and Apple), Call Recording, and much more.

NEC phones offer a sleek and sophisticated user interface with large displays and easy access to the many features you use every day.

This package enters “too good to be true” status with NEC providing nationwide “Below Prime” financing, which ensures you won’t have ANY up-front costs at all when you replace your old office telephone system!

Call is TODAY in Niagara at 905-356-9199 or Toll-Free at 1-855-929-9199 to arrange an complimentary appointment. We will quickly evaluate your EXACT requirements and provide you with everything you need to break free from 1980’s technology and join the Hybrid IP revolution with NEC.

They’re here! NEC has announced the release of their new line of PBX systems, including the SV9100, which was designed as an upgrade path for the current SV8100 phone platform. The SV9100 supports up to 1,360 ports but a scaled down version supprts up to 48 ports for small businesses.

The SV9000 phone systems also have two new phone series. The new IP telephones are the DT800 series, replacing the DT700 sets, while the look-alike digital models are now called DT400 sets, replacing the DT300 phone series. The IP models now boast Gigabit models that sell for little more than 10/100 models, a big change from the Gigabit adapters NEC formerly required. Also, the digital models will sell at the same price points as the 10/100 IP models, and both product lines include 12, 24, and 32-button models with a choice of black and white or color displays.

Also announced was the touch-screen Android-based UT880. This is a video-capable desk set (the tablet component is not removable) whose screen presents a typical DT-Series interface. One interesting feature, addressing the concern that hackers could potentially take control of the camera, is a manual switch that buries the camera’s lens behind a physical shroud when not in use.

The new NEC UT880 is an awesome communication tool for the busy executive!

NEC plans to open its own app store for the UT880, which will offer enterprise-oriented vetted apps to protect against malware, which seem like a prudent idea. Partnering with a mainline Android supplier like Samsung may have been a wise choice, as Samsung is years ahead of all of the UC suppliers when it comes to delivering what enterprises need in mobile devices.

Clearly malware is an issue with Android devices. In a 2014 report, Cisco Systems indicates that, “Ninety-nine percent of all mobile malware in 2013 targeted Android devices. Android users also have the highest encounter rate (71%) with all forms of web-delivered malware.”

Unfortunately, Apple’s tightly controlled developer environment leaves Android as the only available platform for mobile O/S-based desk sets. To address the malware threat, Samsung has come up with its own enhanced security mechanisms with its KNOX offering. Samsung will also be offering its own enterprise app store. I’d prefer to be tied into that Samsung ecosystem, rather than trying to crack the Android nut on my own.

NEC has also developed the DT770G iPad cradle with talk of potentially significant enhancements. The DT770G includes an app that emulates a PBX station, and the cradle connects the iPad via Bluetooth and provides a handset and speakerphone.

The DT770G operates over the customer’s in-house Wi-Fi network. That means that the Wi-Fi infrastructure will need to be voice-capable, but as the device is stationary, at least it will not face the problems we have seen with access point-to-access point handoffs. As the docks use the iPad’s Wi-Fi interface, they operate on 2×2 802.11n radio interface. NEC was talking about an enhancement that would allow the iPad to operate over an Ethernet connection when docked, and over Wi-Fi when mobile, but no date for this feature has been announced.

NEC also has a range of DECT-based wireless devices, including a communication badge, that would be capable of dialing a single pre-programmed number with the push of a button. They have also created a prototype of an Android-based smartphone-like device that would support voice over DECT and data over Wi-Fi.

NEC has demonstrated its’ WFAZ wireless adapter. The WFAZ can attach to any of NEC’s IP desk sets and allows it to operate over a Wi-Fi network. This could be a handy way to install stations in areas where it is difficult or expensive to install cable drops, assuming there is adequate Wi-Fi coverage. A PC can be connected to the data port on the IP desk set, allowing for voice and data support over the Wi-Fi connection.

NEC’s dealers like Telephone Magic Inc. love all the new developments from our primary phone system supplier. Business has been strong and we are very enthusiastic about all of the new developements in the product pipeline. However, mobility continues to confound the UC market, so it may be some time before we see tangible benefits and significant revenues coming out of the mobile side of UC.

IP Office can have full redundancy by running multiple copies running at alternate locations or offices. You can have the IP phones from a primary IP Office cabinet fail over to a redundant alternate cabinet, and vice versa. This redundancy can be either local (LAN), or wide area (WAN)

For example, say you have a primary IP Office in Birmingham with 100 users, and alternate IP Offices in various offices with 30 users each. The handsets from London can re-authenticate to an alternate switche in one of the other locations if the system in London fails, and vice versa with London providing the back-up for the other system. Add SIP trunks, and you can have the dial tone fail over as well. With IP Office, you have the choice to set up your network as a mesh or star configuration. A mesh offers more failover choices than a star, by preventing overloads on any one particular server.

Not only can the Avaya IP Office operating with release 6.1 support IP Office cabinet failover, it can also support an extremely elegant voicemail failover unprecedented in the SMB market. Various levels are available:

Is YOUR business phone system 5-10 years old? God forbid it is not OLDER than that as it simply qualifies for display at the Smithsonian in that case.

The biggest improvements in telecom systems in the past 5+ years are things like #BYOD, Mobile Extension, Voice Mail to Email, improvements to integrated #UC (Unified Communications), SIP trunking, etc. If your business telephone system is older than that, there is a good chance it does NOT include capabilities for these advanced but necessary features in the age of improved accessibility from clients, suppliers, and co-workers.

In the spirit of New Years Resolutions, it’s time to propose a new telephony platform for YOUR business!

Here’s some choices in a varied range of features and pricing:

Avaya IP Office – After purchasing the SMB platforms from Nortel, Avaya captured an “Upgrade with us” capability and have been porting clients over to the Avaya IP 500 phone system by allowing Nortel users to keep their existing phones. This prevented the Nortel ICS line from eventually becoming a dead end for users. Expansion is a snap as well, with IP 500 Expansion cards and modules. Users can eventually add to and/or replace phones with a wide range of choices of new Avaya IP Office phones.

NEC SV8100 phone system – This system has all of the features mentioned below. We love Voice Mail to Email and Mobile Extension to keep in touch with your clients, even when you are not in the office.

Avaya / Nortel BCM – When Avaya took over the Nortel SMB lines, one of the exciting acquisitions was the Business Communication Manager – or BCM. The BCM starts with the small business BCM 50, a compact but powerful IP capable telephone system. The other currect BCM brought over initially to Avaya was the BCM 450 for enterprise clients. Both of these platforms are easily expandable with a variety of optional hardware, referred to as BCM Media Bay Modules, and software, often called BCM Key Code Licenses.

Regardless of which phone system you choose to upgrade to, think about all the things you wish to do with your business telephones and then call Ryan Altseimer toll-free at 1.855.929.9199, extension 3007, to match your requirements and budget to an appropriate system. Happy New Year from all of us at Telephone Magic – we hope to assist you with YOUR New Year’s Telecom Resolution!